A colleague of mine (I’ll call him Simphiwe for the purposes of this post) recently asked me to act as scribe while he dictated what was to be displayed on one side of his R5 money jar. He’s a stand-up guy so I didn’t hesitate to help him.

The jar, you will notice,  was once a plastic milk bottle. But it has since undergone a stringent homologation process, transforming it into a piggy-bank or rather, a milky-bank. 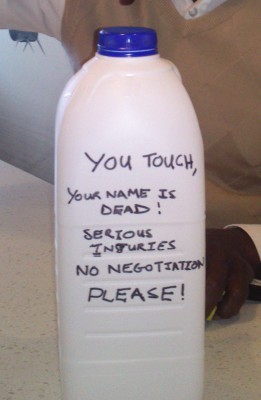 Yes, your name can die.

Wow. The implication of even touching this milky-bank is that you’re name will be murdered. Think about that for a second. The owner will make you disappear to such an extent as to make you name-less. No follow-up, no records. It would seem Simphiwe has a contact in Home Affairs who can have you removed from the system.

But I would imagine truly killing a name requires more than that – perhaps one of those memory-zappers from MIB.  So  there’ll be no questions asked – no ‘Hey, what happened to Martha?’ or ‘Have you seen Bob around lately?’ No one can come looking for you when they’ve completely forgotten who you were to begin with. Frightening. At least he said please.

As well as having you’re name annihilated, the penalty for touching the milky-bank includes grievous assault resulting in ‘serious injuries’. And if you thought you might be able to wrangle your way out of it with that sliver tongue of yours, think again. There will be ‘no negotiation’.

Simphiwe:
‘YOUR NAME IS DEAD!’

Simphiwe was very happy with his cautionary label but after some deliberation, he decided it wasn’t quite cautionary enough. So he added to it.

He had the space. Why not use it, right?

Things have turned up a notch. Where before, you were forbidden from touching the milky-bank, now, if you even dare to go near it, ‘fire is coming’.

Who knows? All we do know is, you’ll want to passop and stay away from Simphiwe’s milky-bank or risk his wrath. A wrath that includes, serious injury, the complete and utter destruction of your identity and the experience of burning in the flames of thiefdom.

Hardly worth it for a few R5 coins.

You’re better of catching a free lunch with the EFF.

Image: New Nameless by roachy_737 via Flickr under the Creative Commons license.

I am The Aniallator. I aniallate things. That is my face. It faces things. View all posts by Aniallator